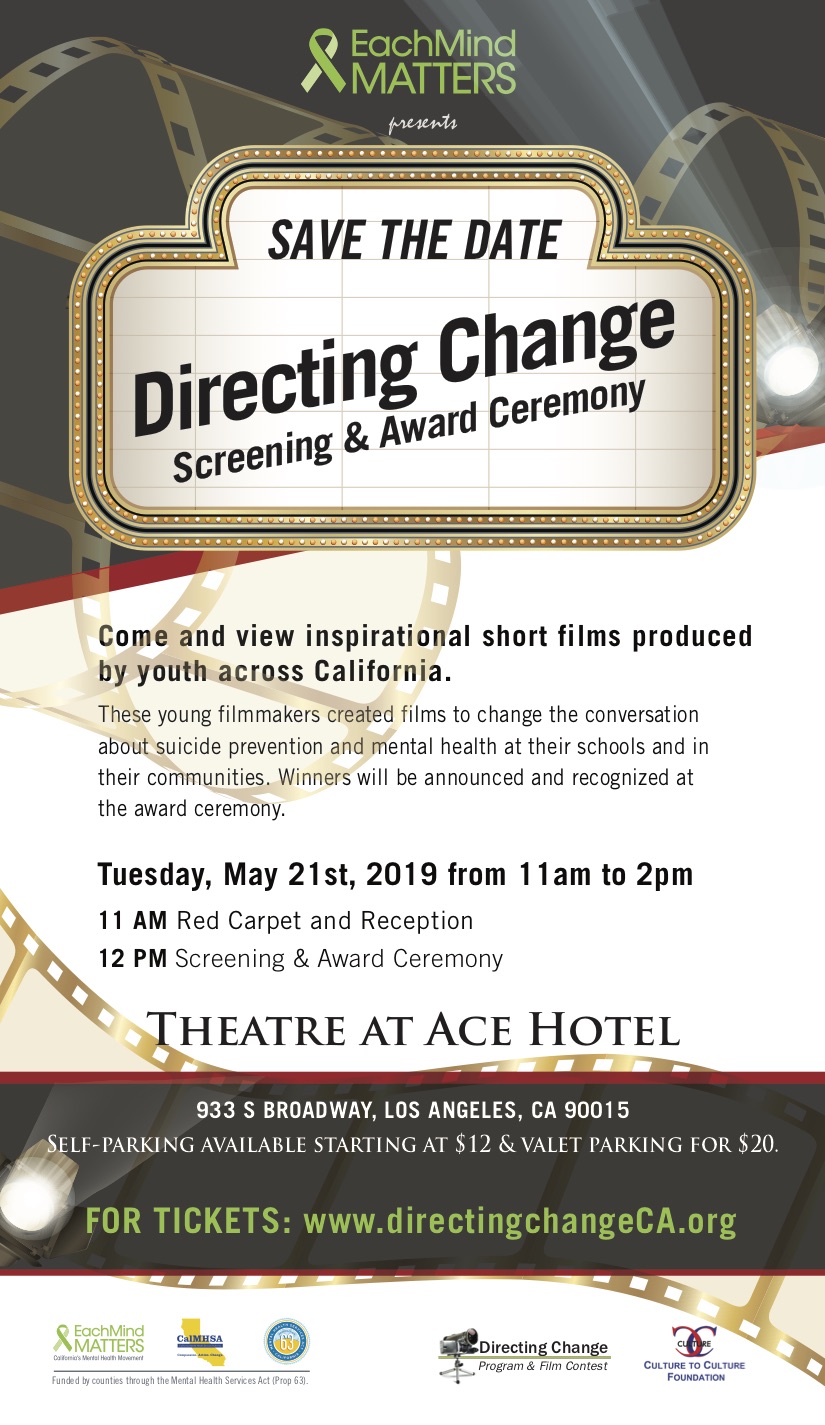 Pictures from the 2015 Event

More than 1,000 youth from across California

attended events organized by Directing Change on May 21st in downtown Los Angeles to celebrate the young filmmakerswho have decided to use their own voices to direct change. The Awards Ceremony took place to a full house at the historic Theatre at the Ace Hotel. Statewide winners also had the opportunity to network and participate in panels about how to pursue both their passion for advocacy and interest in film in the future the evening before at the Hilton Checkers Hotel.

View and Download photos from the 2019 Award Ceremony here.

On the evening of May 20, 80 youth from across California came together to participate in a social justice networking night sponsored by Directing Change and the Social Changery. The youth networking event included panels with film producers Lisa Klein, Doug Blush, and Michael Gilvary, as well as mental health advocates Adella Nunn and Andrew Charroux, and online influencer William Haynes. Participants engaged in meaningful conversations around how to integrate social justice into their current world as youth advocates and in their future careers.

The four stations that youth rotated through were:

More than 1,000 guests attended the red carpet awards ceremony and top films screening in downtown Los Angeles on Tuesday, May 21st to celebrate the achievement of young filmmakers across the state. Youth filmmakers from across California were given awards for their short films to raise awareness about mental health and suicide prevention in several categories, including Mental Health Matters, Suicide Prevention, Through the Lens of Culture, SanaMente – categories focused on the experience of diverse communities – and Animated Short, and Walk in Our Shoes a new category introduced this year specifically for middle school students.

The awards ceremony also celebrates outstanding achievement by directors, producers and actors of film and television who serve as role models to the aspiring youth filmmakers in the audience by using their platform to draw attention to mental health. Speakers and presenters at the award ceremony included L.A. County Department of Mental Health Deputy Director Mimi Martinez McKay, California Secretary of State Alex Padilla and mental health advocate Angela Padilla, actress Justina Machado, and Through the Lens of Culture sponsor Chia Chia Chien. The award ceremony celebrated Justina Machado by awarding her with the “Directing Change Recognition for Outstanding Show with Messaging Around Mental Health, for her work on the series “One Day at a Time”. Actor Kalama Epstein from the series “The Fosters” and actress Lizzy Greene from “A Million Little Things” were also in attendance, presenting awards to youth winners and encouraging youth to continue pursuing their passion for mental health and social change.

The ceremony also included a musical performance and dance performance

This year, from across the state, Directing Change received 1,063 films from 170 schools and community-based organizations, representing 29 counties and Tri City and 3,346 youth. Entries were judged by nearly 300 advocates and professionals in mental health and suicide prevention, members of the media, and television and film professional.

To view films and for a complete list of statewide and regional winners, honorable mentions and special recognitions, visit www.directingchangeca.org/films. You can read more about the awards ceremony and other mental health programming across California on the Each Mind Matters Blog.

If you are experiencing an emotional crisis, are thinking about suicide or are concerned about a friend call the National Suicide Prevention Lifeline immediately: 1-800-273-8255This is a free 24-hour hotline.